I wanted to take a look back over this first year I’ve been blogging and pick out some highlight posts. I hope it’s interesting to you, and not just me. This will probably read like a Christmas newsletter. If you like that sort of thing, come visit every August 20th or so. We don’t send Christmas greetings.

I started blogging for a few reasons. One, to keep some records of family stories since I don’t scrapbook, rarely take photos, and also have an awful memory. Two, I wanted a place to start writing about writing and reading while my book went on submission. It was partly to distract myself and partly to get my name on the Internet and start building a tiny community of writing friends. Hopefully, it will also someday be place to make announcements about book sales and such. Always hopeful.

Let’s begin with what the girls looked like last August compared to this August (Well, June). And now Maggie’s hair is dark brown. But, you can still the change. 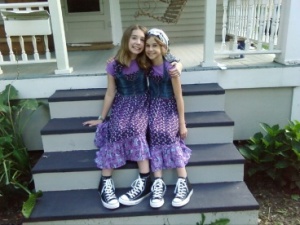 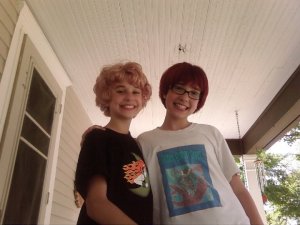 In August and September I got a feel for what I wanted to blog about. I compared some of Josh’s family to movie stars. What ever happened to that game? I’ll have to bring that one back.

In October I did my first installment of Self-Deprecating Sunday. It was also the month I did my first author interview, with Sarah Lewis Holmes. I remember my surprise at finding someone else who wrote a Children’s book with a military theme. I felt honored that she would visit my blog. And, October was the month I recounted the beginning of our family tradition where we eat a chocolate cake for dinner. This is one of my favorite posts.

November saw my first interview with a soldier. I struggled with starting to write my second novel. I predicted a few books that I thought might win the Printz award, and later was completely stoked to see that one of the ones on my list did in fact win!

In December, I recounted the story of Doug the Dog, which is another one of my favorite posts. Also, I got a signed copy of my favorite book from my good friend Berk, took a count of how many books I’d read in 2009 (29), and Eleanor dyed her hair blue. 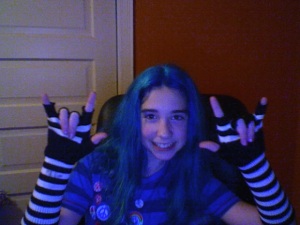 What I didn’t blog about in December was that it was the month that book rejections started to come in. It sucked. One in particular was pretty painful–only because I admired that publishing house’s body of work and thought mine would fit there nicely. And while no publisher has said negative things about it, come on. It’s rejection. It can be as heartbreaking as being dumped by your boyfriend. I’ve spent a few years crafting that goddamn book. And it’s good.

In with 2010: Josh and I took trips to Pittsburgh and to Albuquerque while he interviewed for residency programs. I remember the nuanced lists we created while we tried to figure out how he should rank the different programs. It seemed both daunting and hilarious that we’d have to pick 10-20 cities to live and then get matched to one of them by some kind of weird algorithm generator. I think they really just use a magic 8 ball.

February is when my friend Berk’s book came out, so we celebrated with Berk doing a guest spot on Self-Deprecating Sunday. And it is my all time favorite post on my blog to date. I dare any YA Author to top his photo. Also, I’d been excited for his book release for months, and it was a fantastic read. I recounted the story of Josh calling our dog on the phone, another highlight post. I continued to struggle with writing the next book and the incoming rejections as well as trying not to stress out about where in the world we were going to live for residency.

In March I reached my 100th post. Yay! Josh got matched to Indiana’s residency program, thank the lord (or whomever). Holy virgin was that a relief! I also did a nice post on why I like writing YA fiction.

April saw more book rejection. They come in slowly. Each one packs a new wallop. I tried to settle myself and my wanting in this post about desire. Desire is difficult thing. Then WordPress came along and surprised me by featuring two of my posts, Something To Do With Garden Gnomes and Why Don’t I Have Issues With Privacy, on their homepage feature, Freshly Pressed, which garnered thousands of visits to my little blog and made me feel famous for a couple days. That was  fun! I had to start saying goodbyes to my Ann Arbor friends at this point, and I begun looking for work in Indianapolis. You really haven’t lived until you’ve received book rejections and employment rejections at the same time. Wow.

In May I finally stopped feeling sorry for myself and my book. I had to pack the house and say goodbye to it. I loved that house. And then Josh graduated. Another HUGE relief.

We finally moved in June. I got that reading chair, Colonel Mustard, that I’d been needing. Whew! I talked a lot about books in June. I also realized the weirdness that was my new job. But was incredibly productive in drafting that new book.

July presented itself with more weirdness at work, and I was becoming exhausted and increasingly heart-broken. So, I had this brilliant idea to get a new dog. HUGE mistake.

Which brings us to this August, where I had a bout with the security system, had my favorite author interview with Erin McCahan, and talked about how residency has changed Josh and my relationship.

Realization: I have a lot to say in a year. I hope this upcoming blog year will keep you all interested and I thank you for all your support and comments. I love the Internet community. Cheers!

2 thoughts on “Looking Back”