Sorry if you’re uninterested in Pittsburgh, but there’s more you should know about it. For instance, I found my dream house, or rather, dream condo. It’s in a church. On the South Side  (the artsy side) there is an old church that’s being renovated into condo units; it’s called Angel’s Arms, and the units are custom-designed per occupant. The view of the city is spectacular! This city is seriously like the San Francisco of the Midwest. I kind of can’t believe I’d never been there before.  Here is the church. There is the steeple… 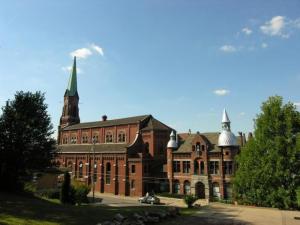 …open the doors, and see the rich people! Or at least see how they live. Here is my dream fireplace. 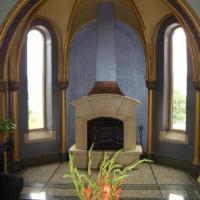 I think I’ll be like 180 when I can afford to live here, but this is the dream, people, if any benefactors want to step up. And while I’m on the subject of churches, feast your eyes on the cathedral of learning! 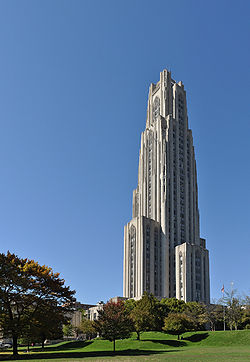 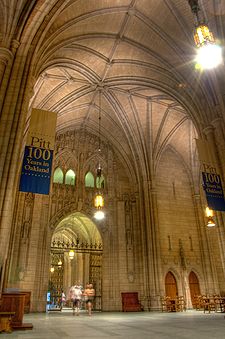 It’s a huge public place to sit and learn. This photo is of the entry. Go here to see more cool study rooms. I don’t know about you, but I’m pretty sure I could craft a pretty damn fine young adult novel if this were my office. I can see why Pittsburgh is one of the most literate (8th in the nation) places to live. (Thanks, Berk.)

The other part of Pittsburgh that I dug very much is the The Strip. It’s market after market of fresh food from every ethnicity you can imagine. Too bad I don’t cook. But, in a tiny corner of an enormous warehouse on The Strip is a donut shop called Peace, Love, and Little Donuts. Ron, the baker, gave us his card and cell # in case we needed anything while we were there, or if we decided to move there. It’s damn tempting, people. Damn tempting! Those little donuts were as awesome as Ron!

So, what do we do? How do we rank the residency programs; it’s a dead heat for the top two choices, which I’m not supposed to name. But do you choose the #1 spot based on Residency Program strength or do you choose based on the city where you want to live for the next 3 or more years? What would you do?