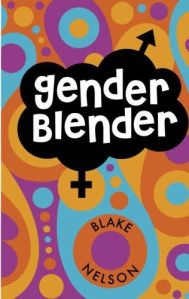 I was really slow getting on the Blake Nelson train. I just read Paranoid Park last year. Didn’t even know it had been a movie. Still haven’t seen that, but I was in love his writing from the start. When I think of edgy YA fiction, I think of Paranoid Park. That book was dark, met with concepts I hadn’t seen in Young Adult works, and the ending wasn’t tidy. For such a slim book, it hit me in just the right way. So, after I read that, I went to my Goodreads list and marked a few more of his books to read, including Gender Blender.

I dig this cover so hard, I didn’t even read the jacket copy to what this was about. Kenny Holcomb, I hope you design a book cover of mine someday. So, knowing Nelson’s dark and edgy YA style, imagine my surprise when I opened this book to find a middle-grade comedy. Now, it’s not as if the cover I’m so in love with screams or even smirks of darkness, so I’m not sure why I was so surprised. But I was. I normally only read one or two middle-grade novels in a year, and usually it’s out of some sort of duty to a recommendation or because it’s a Newbery winner. So, I was kind of like, huh. But that cover!  And it was Blake Nelson!

I ended up reading it quite happily, as it was intended to be read. And I was very pleased and even more impressed with Nelson for being so versatile a writer. The book is a junior high version of Freaky Friday, and the body switching occurs between a boy and girl who are classmates. Yes there is a boner scene. Yes there is a period scene. Yes they are awkward. And funny. And there’s no way this book could have happened without them. I’m still amazed that any dude would tackle the voice of a junior high girl, and Nelson has done it successfully in this book.

I’m looking forward to more books by Nelson. And I won’t be going in with any subject matter or stylistic expectations next time.