In the spirit of the Holidays, I thought I’d post some of my old writing and illustration. You can clearly see my talent leans toward writing for young adults. This was back when I was still making the Y in Jody backwards, so I was maybe six years old. This was also back when the only holiday we talked about in school at this time of year was Christmas. Oh, elitism.

Rudolph has a red nose. Some laughed and called him names. Santa picked Rudolph for the leader. 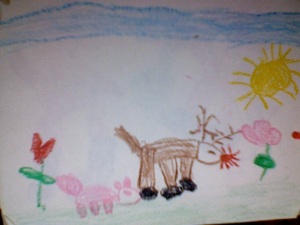 (Apparently Rudolph also dreams of little skunks made out of pink bubble gum and a life of sunshine and flowers made of hearts and pink clouds. He may also be wondering where is other leg is…or he’s lost one of his black boots while hiking his leg to pee.)

Once upon a time there was little mouse. He did not have  a name. Santa named him Santa Mouse. He helped Santa with the presents. 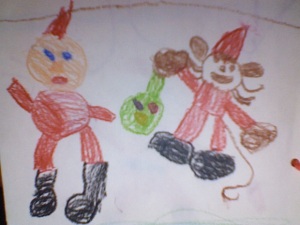 (While Rudolph is pondering his missing leg, it’s clear why Santa needs help: He’s lost his hands. And his hair. This has driven Santa Mouse to drink. Apparently his drink of choice is Absinthe.)

2 thoughts on “Must Be Santa”