I loved this book! Noggin was my first John Corey Whaley novel, and I will certainly be reading more after finishing this funny and 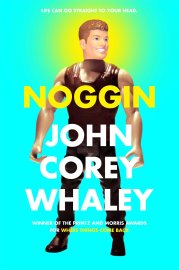 bittersweet story that is the perfect follow-up to The Fault in our Stars by John Green or Love, and Other Unknown Variables, by Shannon Lee Alexander, or any other book that  takes you on a journey of loss and grief and teenage love and leaves you with a longing to make the most of life.

Noggin is a story about a teenage boy who has died of cancer but had his head cryogenically frozen until the day when doctors can attach a new body and give him a second chance at life. That day comes only 5 years after his death–much sooner than anyone could’ve hoped for and just long enough that everyone has grieved him and seemingly moved on, including his girlfriend who is now engaged. His parents are acting strange and his best friend isn’t acting himself either. But for Travis, it’s like he’s just had a nap. Adjusting is hard to say the least. And anyway, Travis knows that he’s been given a second chance for a reason, so he does everything in his power to get his old life back. Good idea, Travis. What could possibly go wrong?

I wish I’d thought of this plot. It is such a good metaphor for resisting all that adulthood brings with it–the thing that our beloved characters in The Fault in our Stars and Love and Other Unknown Variables will miss out on. And while we know that our friends in these books would have loved to have had the ache of adulthood, Travis must actually go through it before he’s ready, willing, and able. He does so bravely and stupidly–as you’d expect–and is all the more lovable for it.

I’d love to see this be nominated for the Printz this year. I’ve read a few tremendous books so far this year, and this is certainly one of them. So if you’ve just bawled your eyes out after reading The Fault in our Stars or Love and Other Unknown Variables, pick up Noggin.