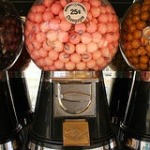 When I was a little girl I would use my birthday wishes to try and turn the world into a place where everything was made of pink bubble gum. If it eventually happens, you know who to blame. I’m not too worried though. But, I was thinking about that and comparing it to how my own daughters imagine and make wishes. Part of writing young adults books is understanding the way young people think and operate. I love thinking about how my own kids think.

My daughter Eleanor at that age once told me she wanted to grow up and live in a naked city. I told her I probably wouldn’t be coming to her place for holiday visits. Magnolia lost a tooth the other day and informed Josh she’d be putting it under her pillow for him. Every year they sleep under the Christmas tree not to wait on Santa, but to be within an arm’s reach of the presents under there when first light hits. Did they ever believe in Santa? I don’t think so. Once, Eleanor said sadly, “I wish dragons were real.” It was more of a realization that they never would be than a prayer for change.

So, I was raising realists. Was this somehow going to thwart their imaginations, I wondered. But no, I don’t think so. In fact, they have an understanding that I didn’t. They can master their wishes and imaginings on paper or during play in a way I never bothered with. They can create more completely because they know they are in control. I believed so hard in some magic force that would actually turn the world into bubble gum for me, that I think I never let my imagination play itself out and see what that world was really like. I would stop imagining when the wish was done. And then I’d wait.

I suppose this is one more reason why I’m so in love with reading and writing stories now, especially ones with teenagers, where their wishes become more about where they fit into the real world, and how their imaginations might change the course of their lives. And maybe this also why I love contemporary fiction. I LOVE the magic of real life love and suffering that makes us human.

One thought on “A World Made of Pink Bubble Gum”