If you work or have worked in the corporate world, this meme likely resonates with you. 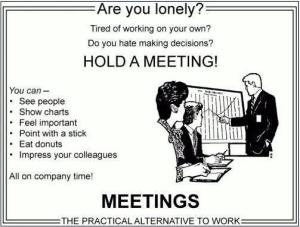 I’ve been out of the corporate setting now for around three months and am more content than I’ve ever been. Instead of worrying if the team will actually adopt a new policy or if the client will actually implement the work we spent hundreds of hours on, I worry that I’m not saying what I want to say in my novel writing or that it won’t resonate with people the way I hope. But even if no one ever reads my fiction, I love the struggle of creating a thing that gives people a sense of personal and universal truth; and that’s what makes my life different now. They’re struggles I choose not struggles someone is paying me to nurture. I often wonder how many people really love their corporate jobs. It’s easy to assume that since it was never my first love that it’s no one’s first love. Maybe it is.

Last night, Josh and I went out on a date and the restaurant we chose was pretty meh. The crowd was not our crowd. The setting wasn’t inviting to us. The food was mediocre. We decided the restaurant was too corporatized. It was owned by a group, and you could tell that it was trying to reach everyone instead of cultivating a single personality of patronage. So that probably influenced what came next. We were sitting outside, and one of those pedal bars came down the street. If you’re not familiar, here’s a picture: 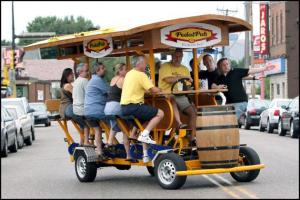 The idea is that you all get drunk and pedal around town while a non-drunkard gets paid to steer. As Josh and I watched it go by, I said, “Do you think anyone is actually having fun on that thing?” And then we started chatting about how it’s the perfect metaphor for corporate life. A group of people come together because someone organized it–and even that guy is sitting there the whole time wondering if he did the right thing and looking around to see if everyone is having fun. Then they all pedal around–some more furiously than others–going nowhere and drinking like crazy to get through it all-the-while never making any collaborative decisions about which way to go. Instead, they very strategically clog the flow of traffic.

I had some great times in my corporate life. I met some of my best friends and worked along some of the best people Indianapolis bred or attracted. I don’t regret it. I just think we’re meant for more than meetings and busywork. Did anyone ever fall in love because of a meeting? Maybe in spite of it. Does anyone ever look back on their life and say, “I remember this one time during a meeting…?” Well, maybe they do, but I’d bet the wonder and meaning of the moment came about because of the people and not the subject or project at hand. Is unrealistic to think that even in your work, you can and should have meaning?